You’ve probably tasted or heard about this delicious and outstandingly beautiful cake before, but have you ever tried the traditional German recipe?

The dessert is named not directly after the Black Forest (Schwarzwald) mountain range in Southwestern Germany but rather from the specialty liqueur of that region, known as Schwarzwälder Kirsch(wasser) and distilled from tart cherries.  Kirschwasser  is a clear, colorless fruit brandy traditionally made from double-distillation of Morello cherries, a dark-colored cultivar of the sour cherry. Although, the beverage is now also made from other kinds of cherries. This is the ingredient, with its distinctive cherry pit flavor and alcoholic content, that gives the dessert its unique flavor.

The color contrast between the black from the chocolate, the white from the cream and the vivid bordeaux from the cherries make this cake a solo presentation on any table. Perfect for birthdays or family holiday reunions, it can serve 10 to 12.

Note: We do not recommend it for kids birthday party due to the alcohol content.

The recipe for this gorgeous cake was brought by Barbara Taron, an expat from Germany who has been living in Oklahoma for the past 36 years. Her husband is a native of France and their two grown-up sons who have been born in the USA, are Americans who appreciate the best of all three worlds.

“I have kept my ties to Germany and France alive through teaching German and French at college level, by organizing student trips to Germany, and through active participation in several ethnic organizations such as Tulsa’s Sister City Celle in Germany, the German American Society of Tulsa, and the Alliance Française de Tulsa.”  – Barbara Taron

Although she says much of her cooking has been adapted to the faster and easier American way of meal preparation, when it comes to baking, she considered herself still very rooted into German traditions. Her recipe for “Schwarzwälder Kirschtorte” (Black Forest cake) comes from her German Time Life cookbook. 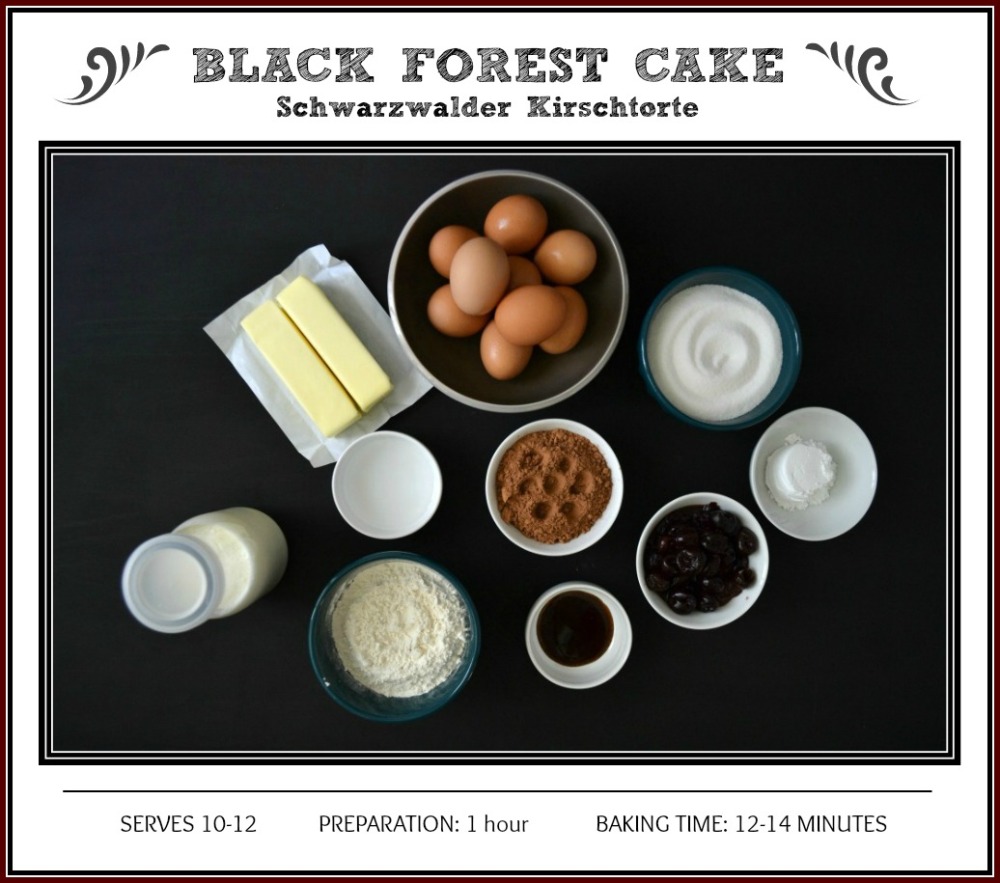 -INSTRUCTIONS FOR THE SYRUP

-INSTRUCTIONS FOR THE CHOCOLATE CURLS

Note: Chocolate bar should be at room temperature but not soft. Keep it in the refrigerator until using it if your kitchen is hot.

-INSTRUCTIONS FOR CLARIFYING THE BUTTER

-INSTRUCTIONS FOR THE CAKE MIX

-INSTRUCTIONS FOR THE FILLING AND TOPPING:

Note: keep the heavy whipping cream in the coolest area of the fridge until using it.

-INSTRUCTIONS FOR ASSEMBLING THE CAKE: 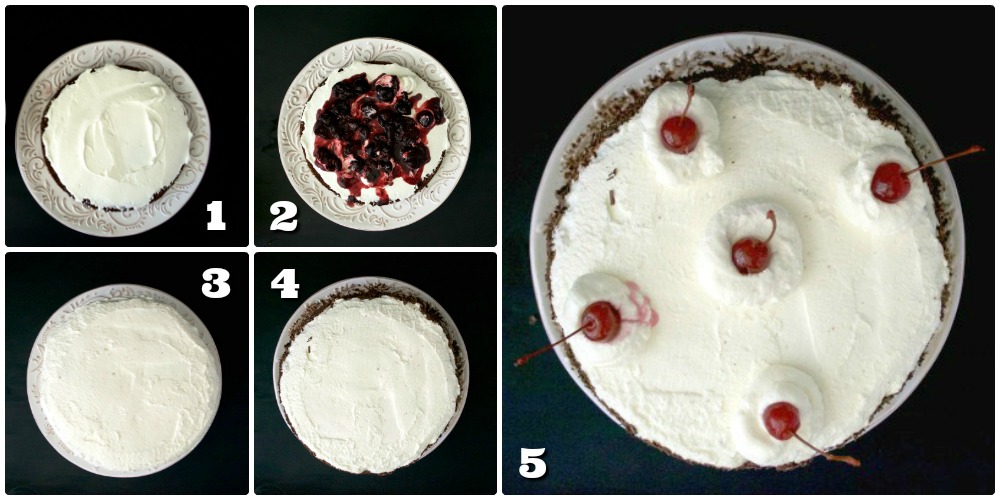 Note: the cake should be kept in the fridge in a container to avoid dryness. 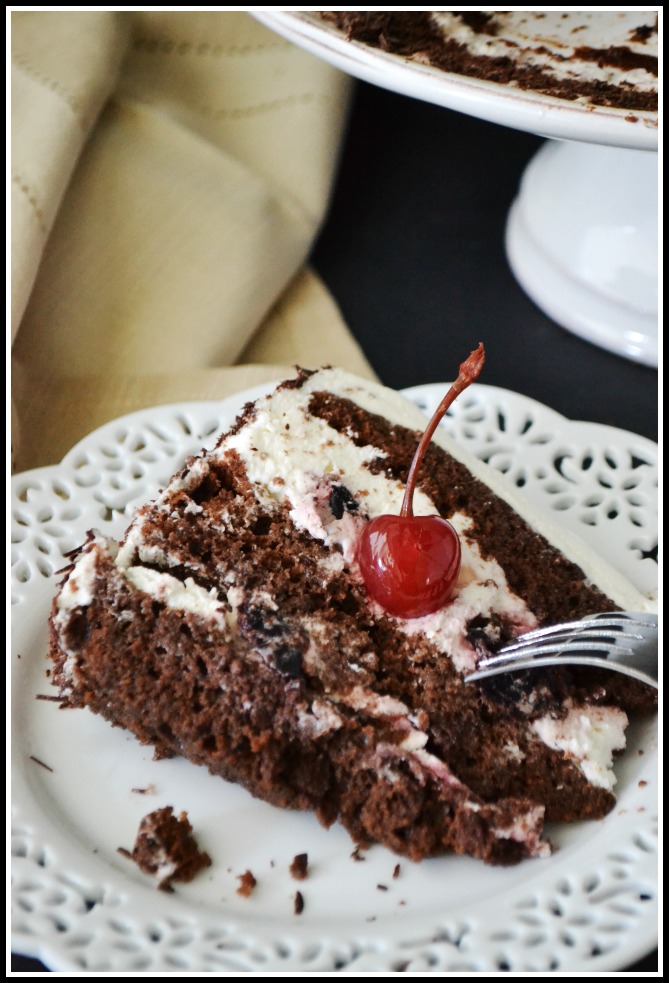 Combine 3/4 cup sugar and 1 cup cold water in a small saucepan. Bring to a boil over moderate heat, stirring only until the sugar dissolves. Boil briskly, uncovered, for 5 minutes, then remove the pan from the heat. When the syrup has cooled to lukewarm, stir in the kirsch. Reserve it. Note: Chocolate bar should be at room temperature but not soft. Keep it in the refrigerator until using it if your kitchen is hot. Peel the chocolate paper only up to the part you will shave and leave the paper where you will handle it. Hold the chocolate bar over a cutting board and shave the bar into thin curls with a small sharp knife or vegetable peeler. Refrigerate the curls until you are ready to use them. Clarify 15 tablespoons of butter in a small saucepan by melting it slowly over low heat without letting it brown. Let it rest for a minute off the heat, then skim off the foam. Spoon the clear butter into a bowl and set aside. Discard the milk solids at the bottom of the pan. Grease and line 3  9-inch (23 cm) round cake pans. Preheat the oven to 350° F (180º C). In an electric mixer, beat the eggs, vanilla and sugar together at high speed for 12-13 minutes. The mixture should be thick and fluffy and has almost tripled in volume. Sift the cocoa powder and flour together. Fold the cocoa mixture gently into the eggs, a little at a time. The mixture should have a sponge texture. Add the clarify butter 4 tbsp at a time, folding gently. Do not overmix. The mixture will loose some of its weight but will still keep the spongy texture. Carefully spoon the mix into the prepared pans, dividing it evenly among the three of them. Bake for 12-14 minutes or until a cake tester inserted into the center of each cake comes out clean. The cooked cake should be moist and spongy. Remove the cake from the oven and let them cool in the pans for about 5 minutes. Then turn the cake out onto a wire rack and allow to cool completely. Transfer one layer to the serving plate and the other two to a long strip of wax paper and prick each layer lightly in several places with a fork. Sprinkle the layers evenly with the syrup and let t0 rest for at least 5 minutes. Note: keep the heavy whipping cream in the coolest area of the fridge until using it. In a large chilled bowl, beat the cream with an electric beater until it thickens lightly. Sift the confectioners sugar over the cream and continue beating until the cream forms firm peaks. Gently pour in the kirsch in a thin stream, and beat only until the kirsch is absorbed. With a spatula, spread the top with a 1/2 inch thick layer of whipped cream. Distribute 1/2 of the cherries on the top of cream. Gently set a second cake layer on the top of cherries and repeat the process. Then set the third cake layer in place. Spread the top and sides of the cake with the cream. With a spatula, gently press chocolate curls into the cream on the sides of the cake. Decorate the top with the remaining cream and maraschino cherries. Note: the cake should be kept in the fridge in a container to avoid dryness.